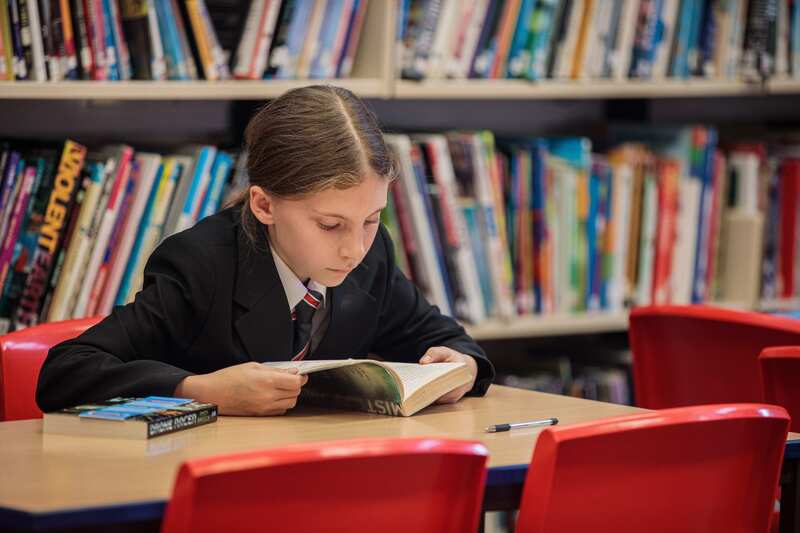 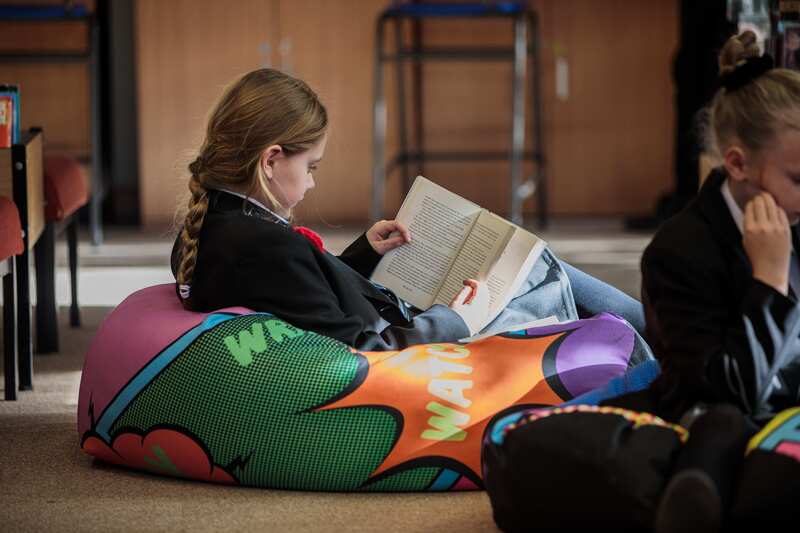 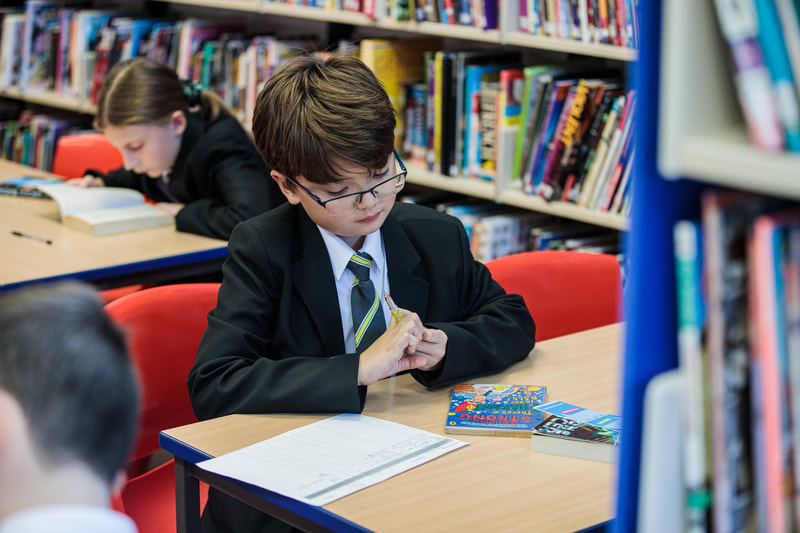 ​The College’s Library Learning Centre is located within the Salcombe block in Room 68. It houses some 20,000 resources catalogued on the Accessit computerised system.  The Library stocks a wide variety of resources that support both the National Curriculum and students’ general interest.  Collections include newspaper cuttings on topical issues, DVDs, review journals, revision guides and magazines.  There are 10 networked computers all with broadband Internet connection, linked to both black & white and colour laser printers.  A colour laser photocopier is available for staff and students to use for a small charge.  There is study seating for 30 students, and soft seating in the fiction area.  It is our aim to encourage students to read for pleasure and to become independent learners.

See how students can use the Library here.
Opening Times
The Library Learning Centre is open from 9am until 3.25pm every day during term time, when teaching groups may visit to exchange books or use the library for research purposes.  Sixth formers are welcome to use the library for research or quiet study at any time.  At lunch or break time students may like to do their homework or simply relax with a book.  You can find out more about what’s been going on recently under the Library News section.

LLC Staff
The Library Learning Centre is staffed by College Librarian Mrs Harrison who is available to help staff and students with all aspects of library provision.  The Library always welcomes any keen students who can help with shelving, tidying and helping younger students working on the computers at break/lunchtimes.
Accessit
​Sidmouth College has a well-stocked library that is available via our College Portal. Select the AccessIt icon and you are on your way.
To find out more visit our Accessit page.

Accelerated Reader
The College follows a reading programme for the whole of Year 7 and 8. The programme is called Accelerated Reader and is intended to improve the reading ability of all students, regardless of their academic capabilities, and have a positive impact upon students’ learning across the curriculum. For more information visit our Accelerated Reader Page.

To log in to Renaissance Home Connect
Website: https://Ukhosted62.renlearn.co.uk/2236383/HomeConnect
User Name: students initial and surname
Password: ABC
Library Photocopy
Students may use the photocopier in the Library for the purposes of their school work. The costs are as follows:
Papercut Account
Students are initially allocated £5 on their account and are allocated £1 each week.  Their printing balance can accumulate up to £5.

The weekly allocation of £1 allows a student to print:

If a student requires additional print credits, they will need to speak to their teacher.
Rules of Copyright
Reading text books, searching on the web, working with interactive whiteboards, watching videos and listening to music.  The same applies to being out of school, working at home or on a school trip.  You are a 'copyright consumer'.  For further information go to this link.

Our new Scholastic Book Club is up and running! Go to https://schools.scholastic.co.uk/sidmouth-college/digital-book-club to browse the latest books and order online. For every £1 you spend on this month’s Book Club, our school will earn 20p in Scholastic Rewards.
Please place your order online by June 21st, 2021 Matt Dickinson is a film-maker and writer who is best known for his award winning novels and his documentary work for National Geographic Television, Discovery Channel and the BBC. His first adrenaline-fuelled teenage series ‘Mortal Chaos’ was published in 2012 followed closely by  ‘The Everest Files’ which drew on his experiences; a thrilling journey to the dark side of Everest amid a shocking tale of lies, betrayal and obsession.

Matt has visited Sidmouth College and held workshops with students on themes such as descriptive writing, the atmosphere and what they’d miss most at home.  Matt has always been impressed with the ability of the students to transfer their ideas into such a high level of writing.  We look forward to welcoming Matt back to the College in the future.

His latest book ‘Lie Kill Walk Away’ can be ordered from the College Library.

As seen in the photography at the top of the page Sidmouth College recently participated in the National Book Day world record attempt.  The event held in the Library Learning Centre with 51 students from Years 7-11 with members of the press, Sidmouth College Association and a teacher (from another school on a visit) were in attendance.

The event started with a loud noise from a bugle and an introduction to the event.  The lights were dimmed and a then the video of J K Rowling reading her first chapter of 'Harry Potter and the Deathly Hallows' was played onto the projector screen a short quiz followed and then another bugle call to announce the end of the session and our participation in the attempt.  7 winners were awarded a bar of chocolate.

We hope to hear that the attempt was successful and will proudly display our personalised Guinness World Record Certificate within the school upon receipt.

Bookbuzz online survey – win prizes and books for your school!

Every year Sidmouth College takes part in Bookbuzz. Bookbuzz is a scheme which provides every student in year 7 with a new reading book which they choose from a choice of genres. This year, over 1,000 schools took part in the programme and over 200,000 students were given the opportunity to choose and keep their own book.